The stable mass transfer channel in light of the lowest mass binary black holes
(no need for common envelopes or a neutron star-black hole mass gap?) 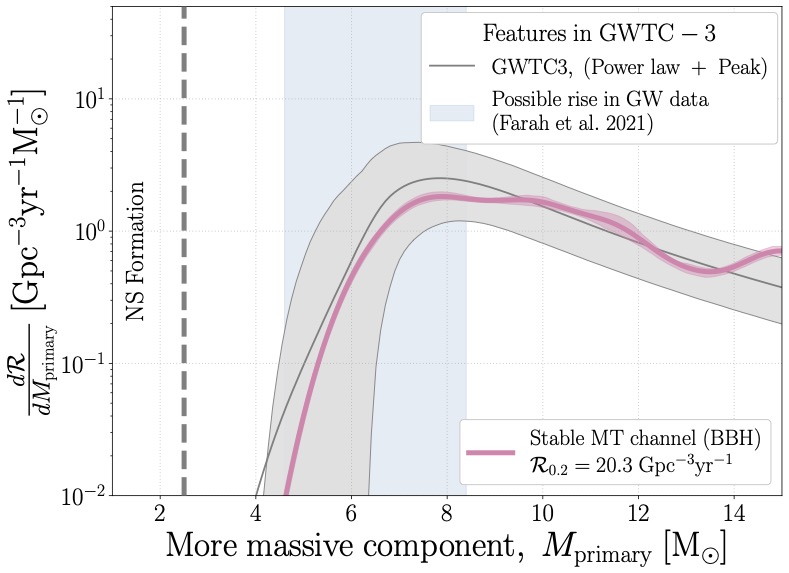 Many different channels have been proposed to form merging binary black holes, but only very few are effective at the low-mass end of the BH mass distribution. Moreover, the global peak of the BBH mass distribution occurs at these lower masses (around 9 solar masses), yet the origin of this peak has received surprisingly little attention so far. In this work, we focus on the lowest mass BHs, just above the edge of NS formation, and show how the `stable mass transfer channel' can explain both the local rate of BBH mergers, and the location of the global peak of the BBH mass distribution, as observed from gravitational waves. We derive an analytical expression that explains this behaviour through the binary physics that governs the stable mass transfer channel, and show that this analytical function matches our numerical results. Our results imply that selection effects resulting from the formation channel alone can provide an explanation for any dearth of low-mass BHs as derrived from gravitational wave observations. This shines a new light on the much-disputed mass-gap between neutron stars and black holes. All code associated to reproduce the plots in this work is publicly available https://github.com/LiekeVanSon/LowMBH_and_StableChannel. and the corresponding data is available here and here.

The locations of features in the mass distribution of merging BBH don't depend on the metallicity-dependent cosmic star formation history.

Large uncertainties in the metallicity-dependent cosmic star formation history, S(Z, z) call for a flexible function that can be easily updated when new information becomes available. Especially since the advent of JWST observations promises many new high-redshift metallicity measurements over the coming decade. In this work, we propose a simple analytical function for the metallicity-dependent cosmic star formation history that can be fit to the output of both cosmological simulations, and observational data constraints where available. We use this new model to investigate the effect of systematic variations in S(Z, z), on the predicted mass distribution of merging binary black holes. This shows that the locations of features are robust against variations of S(Z, z). This is promising as it increases our chances to constrain the physics that governs the formation of double compact objects!
All code associated to reproduce the data and plots in this work is publicly available at https://github.com/LiekeVanSon/SFRD_fit. The data used in this work is available here.

The Redshift Evolution of the Binary Black Hole Merger Rate: A Weighty Matter 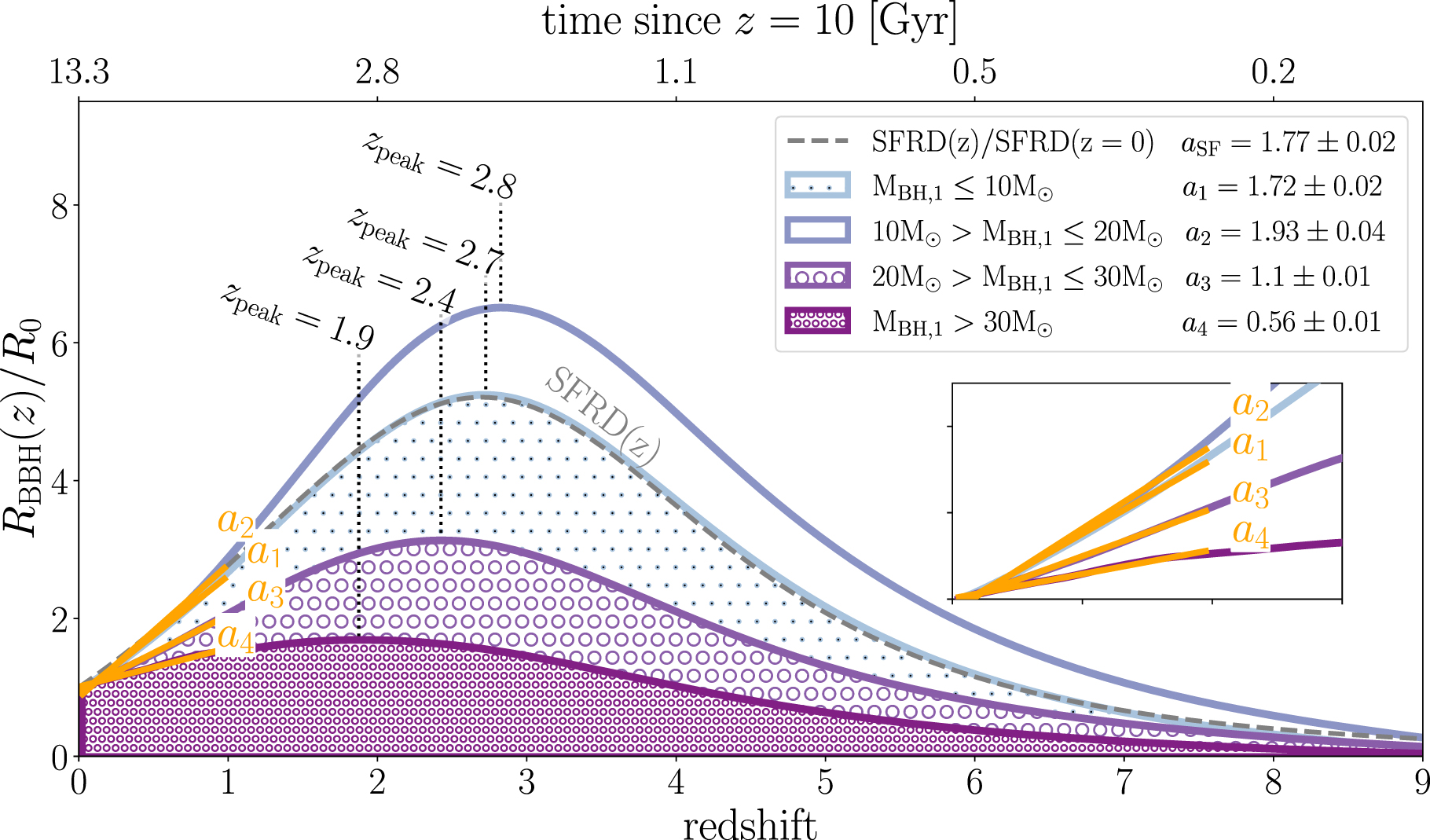 Gravitational-wave detectors are starting to reveal the redshift evolution of the binary black hole (BBH) merger rate. This rate could be a useful to trace star formation from a graviational wave perspective. However, in oder to achieve this, we need to know the delay time of mergers. However, delay times cannot be observed directly. In this work we find correlations between the delay time and the currently best measured observable: the black hole mass. We distinguish two channels within isolated binary evolution and find that one channel (the `common envelope channel') produces low-mass binary black holes with short delay times (t delay ≲ 1 Gyr), while the other channel (the `stable channel') moslty forms high-mass binary black holes with long delay times (t delay ≳ 1 Gyr). This leads to the testable prediction that the redshift evolution of high-mass BBHs should be different than the evolution of low mass BBHs!
For more information see the full article. All code used for this work is publicaclly available here -

The theory of pair-instability supernovae predicts a gap in the mass distribution of stellar mass black holes (BHs) between approximately 45 and 130 solar masses. Can we create BHs with masses in this gap by allowing BHs to accrete mass from their stellar companion at a super-Eddington rate? For more information see here.

Massive early-type galaxies follow a tight relation between the mass of their central supermassive black hole (\(M_{\rm BH}\)) and their stellar mass (\(M_{\star}\)). The origin of observed positive outliers from this relation with extremely high black hole mass (\( M_{BH} > 10^9 M_{\odot} \)) remains unclear. We study such outliers in the Hydrangea/C-EAGLE cosmological hydrodynamical simulations, designed to enable the study of high-mass galaxy formation and evolution in cluster environments. For more information see the full acticle, and movies of the most relevant simulations.

The gaseous environment of radio galaxies 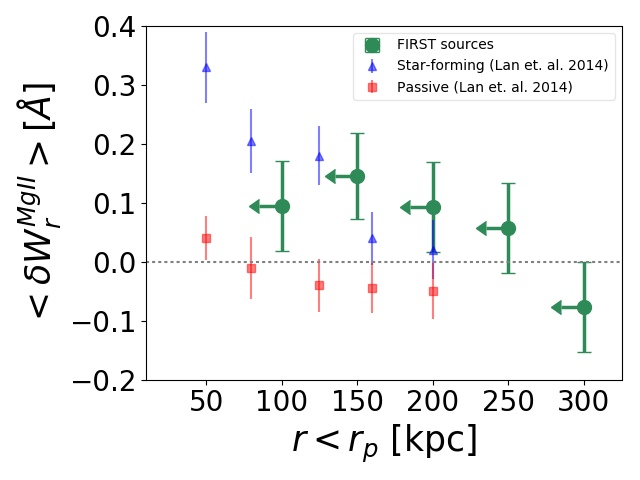 The inter and circum galactic medium (IGM & CGM) play a crucial role in understanding galaxy formation and evolution. One of the most common signatures found in quasar spectra is the strong Mg II absorption line doublet. This study describes a statistical analysis of the abunance of cold gas traced by MgII absorbers by cross correlating the absorbers to quasars observed in radio in the BOOTES field of LOFAR, the NRAO VLA FIRST survey and the LARGESS survey.